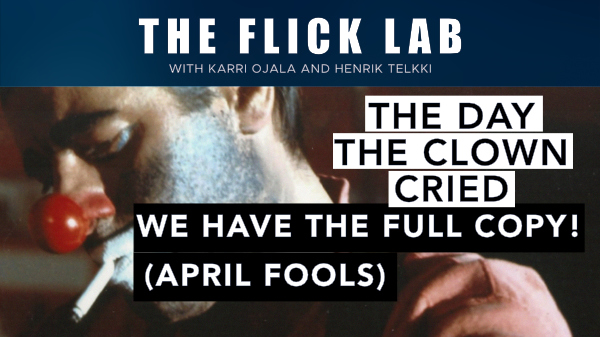 [DISCLAIMER: This episode was made for April Fools. But it was also a fun ‘simulation’ for us, and hopefully for you. We DO NOT have any sort of full version of ‘The Day the Clown Cried’. The episode content is part factual, part improvised fantasy.]

The Day the Clown Cried is one of the most wanted ‘lost’, or rather, unreleased films ever made. Set in Nazi Germany, it tells the story of a clown who gets sent to a political concentration camp. Due to the controversial subject matter, it was never released. To this day, it has been seen only by a handful of people.

It was long believed that only a rough cut exists, but as it turns out, industry professionals close to Jerry Lewis had put together a copy that is as finished as the film will ever be, but it remains unreleased. However, our podcast has now obtained that finished copy.

Join us for the exclusive analysis of the full version of ‘The Day the Clown Cried’.